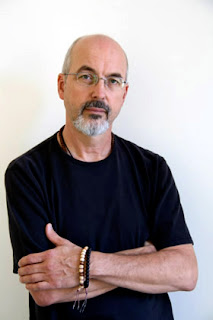 Bill Viola (1951-present) is an American contemporary video/electronic artist. The main concept of most of his work is usually about the human experience of birth, life, death and also consciousness relating to Christianity, which I found pretty related to Buddhism as well.

The followings are some examples of his works:

The Crossing consists of a large screen displaying videos on both sides. One side shows a man walking towards the audience in slow motion and while he's walking, a fire starts to burn him. The fire climbs up his body until the man is entirely covered in flames, then he disappeared. On the other side of the screen is similar, but instead of fire, it has water falling from above, again the man disappeared. Both videos are accomplished with sounds. The opposite natural elements seem to balance out in his work.
Ocean without a shore consists of 3 video screens. They are showing the people approach slowly from behind an invisible wall of water curtain. At the back of the water wall, the people are in gray tones, and as pass through the barrier the colors appeared. This work is portraying the idea of coming back to life. He described his work as “a series of encounters at the intersection between life and death.” 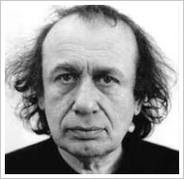 Vito Acconci (1940-present) is an American performance, installation and video artist. His works involves his own body as a subject for the photographs, films, or performance. His works are known to communicate disturbing and unnerving aspects. Comparing to Bill Viola, Acconci has got more variety style of working. His main concept was to experiment with people's feelings and deep social psychological.

Acconci's works also involve the idea of 'narcissism' or the excessive/erotic interest in oneself or one's physical apperance. The sense of erocticism in Acconci's works is more obvious than Viola's. His performances are pretty straight forward and this led to extreme controversy.

The followings are some examples of his works:

Pull is a performance by Acconci and his partner, Kathy Dillion. He walks in a circle around Dillon, while she moves in the center. Staring at each other, they try to maintain eye contact while following the other's changes in direction and speed.  The confrontation became more and more aggressive and intense. Acconci has stated, "I might be trying to crowd her, drive her to a standstill — she might be trying to draw me into her, stop me from circling... I might be trying to remain an observer, detached, on the outside." This performance leads to the idea of feminism and how females are being the victim of threatening. There's another work of Acconci where he displayed the opposite idea, where male is a victim of woman instead.

CHECK IT OUT NOW

"Because You're Worth It"